We hope everyone is taking care and doing their best in this strange and worrying time. Trying to fight this Corona Virus is a bigger job than most of us initially thought but we do seem to be getting there and some of those business’s that were affected by Covid19 are starting to re-open.

Aarons Autos will be re-opening its doors as of the 1st June 2020 and once again be offering its excellent ‘Services’ to the general public and local business’s.

We are putting several measures in place to keep our customers and staff safe from the Corona Virus;

If you have any other worries or queries please don’t hesitate to contact us.

MOT’s have been extended, but we are urging customers to have their MOT’s carried out as soon as they possibly can (or feel safe enough to do so).

There are several reasons we are suggesting getting your MOT done sooner rather than later;

Motorists are still being duped into buying dangerous and illegal tyres. Image: Bigstock.

Trading standards officers have found a number of garages across the East Riding of Yorkshire to be selling dangerous part-worn tyres to the public.

After officers seized two tyres from one garage, an examination revealed they were unsafe for sale and had become degraded due to how old they were.

Both tyres were discovered to have exposed cords which could have resulted in immediate catastrophic failure had they been fitted to a vehicle.

One of the tyres was also believed to be around 28-years-old.

Following a Yorkshire and Humber-wide survey, organised by the Office for Product Safety and Standards, 97 per cent of all part worn tyres examined were found to have some type of defect, with 45 per cent found to have defects so serious they were condemned immediately as unsafe.

Colin Briggs, trading standards manager at East Riding Council, said: “As tyres are the only part of a car that is in contact with the road surface, their integrity and roadworthiness is of the utmost importance.

“Any faults of defects could have catastrophic consequences, such as the driver losing control of the vehicle, not only risking their life, but the lives of any passengers in the car as well as other road users.

Consumers being put at risk

“Our investigations, together with those from around the Yorkshire and Humber region, should act as a stark reminder to anyone thinking about buying second-hand tyres.

“The findings suggest some sectors of the trade have developed bad practices which could be putting customers at risk.

“Consumers may feel that they can get a bargain by buying second-hand tyres, or some consumers may not have any other choice, but irrespective of that, they have the right to demand the products they buy are safe and legal.” 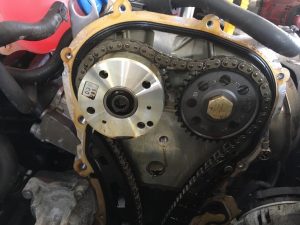 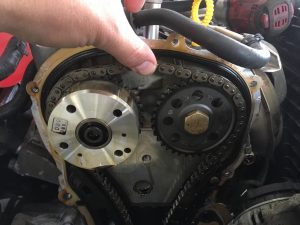 This Audi A1 TFSI came into us with poor running, noisy and the engine management light was on! We carried out a diagnostic code read to find the reason for the EML light to be on which gave us several codes relating to an incoherence between the cam and crank shaft sensors.

The next step was to partially strip down the engine on the Audi to access the timing chain, once stripped we were able to see if the timing marks for the chain lined up with our specialist timing tools, then check for any signs of stretching or damage to the chain and gears.

We sourced a new timing chain kit and tensioner for the A1 and fitted it making sure to check all timing marks were lined up as per factory settings, then rebuilt the engine using new gaskets, oil filter and some fresh oil.

After the rebuild we cleared all the existing codes relating to the timing issues and tested the engine which sounded nice and quiet compared to when it came in to the garage, the engine management light stayed out and all sensors read as they should.

Lastly we carried out a long road test before handing it back to a happy customer.

This seems to be a common fault on this 1.4 TFSI engine which is fitted across the VAG group of vehicles, VW, Audi, Seat and Skoda.

If you would like any more information give us a call on 01332 205070 or drop us an email at dave@aaronsautos.co.uk

Aarons Autos Derby Ltd
5.0
Based on 43 reviews
powered by Facebook

Don't ignore warning lights, they are there for a reason. ...

If you get a warning light on your dashboard get it checked out as you could be making the problem worse by ignoring it.