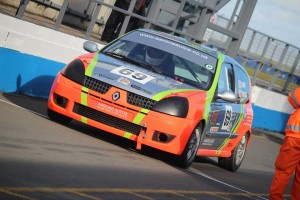 The week commencing our first race of the season at Donington Park I was getting myself and the car ready for its first outing since the winter rebuild when Dave decided to drop a bombshell on me “Im going to race”! for those of you that don’t know he has been in agony with his back for the last few months and had said he probably wouldn’t race this season.

This was great news even if I was a little concerned about his decision but it meant we would be racing as a team which is always more fun and more of a buzz.

This year we are racing with 750 Motor Club in there Roadsports series.

Race day comes and we arrive at Donington around 7.00am and manage to share a garage with Steve Hewson (Trackday Instructor) who was racing his mighty supercharged 106, we got ourselves setup and headed for signing on. 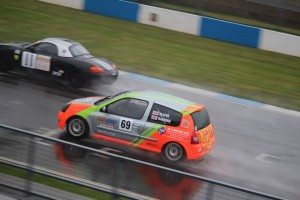 Qualifying soon came around and by this time the heavens had opened and it was wet, very wet! this was good for us because we had noticed from walking around the paddock that most of the cars we were racing against were a lot faster than our humble little Clio and they were mainly rear wheel drive.

Dave went out first and set a reasonable time (limited on laps as its only a 20 min qualifying and you have to do a minimum of three laps each) then i went out and was on average five seconds a lap slower but then i got a clear lap and beat Dave’s time which put us at P5 on the grid.

So Race time, Dave starts and gets a great start and grabs 4th place by the second corner but further back in the field there was a serious incident which collected several cars and meant ‘Safety Car’ after a couple of laps giving the marshals time to clear the wreckage the safety car headed in and we were racing again only to have the ‘Safety Car’ pulled out again after one lap!

The incident from the first lap had caused oil and coolent to be spilt all over Red Gate corner causing cars to spin and slide, after several laps the safety car came in and it was time to get racing again we had dropped back several places due to cars overtaking under yellow flags and not being seen by marshals but Dave was hot on there heels and trying to grab places back.

Pit stop time which in one hand was a complete mess up but in the other it was brilliant! as Dave was passing the pit wall i put my thumb up to tell him he was doing well but he took that as ‘its time to pit’ so on the next lap when I had the pit board out ready to show him he pulled into the pits! I was not ready for him so I leapt from the pit wall pulling my gloves on whilst running to the car and we managed to do a reasonable pit stop time of 1.24 and then it was my turn.

I had no idea what position we were in the race as we usually use radios to pass information from the pit to the driver (not allowed at Dono due to the airport) and we are a bit rusty with the old pit board, I decided that the only thing to do was drive fast and pass everything i could see, this worked well until the next ‘Safety Car’ which meant i was stuck behind a BMW Compact Cup Car that decided he didn’t want to catch up with the rest of the pack and just drive around at 30mph!!! FRUSTRATING, once the green flags were shown i had to wait till we got to the start finish line before i was allowed to overtake him. I managed to get past couple of other cars before the chequered flag but was past by two class A cars a BMW M3 and a very fast MR2 which i later found out were racing for first place. 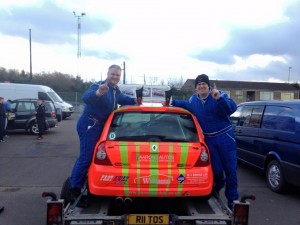 As i came into the pits i still had no idea where we had finished so drove round the back of the paddock where Dave told me we had finished 12th overall and 7th in class! I felt gutted, but anyone who knows Dave knows he is a terrible liar, he finally told me we were 1st in class and 4th overall (3rd overall after the M3 got disqualified for overtaking under yellows) I started punching the steering wheel with joy, it was a far better result than we had expected but as we always say ‘Go for the win’

We would like to say a massive thank you to all our sponsors Sign Design Derby, M J Boyce Ltd, Wilkinson Coachbuilders, HB Group, Fast Away Services and Aarons Autos.