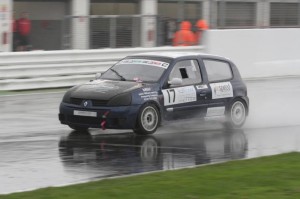 The Silverstone National was a good place to be in a race Clio for round five of the 2014 season as Paul Ivens and Adam Langeveld beat Aaron Harding and David Slater to the win.

It was an all-Guest Class top five, but James Bird and Andrew Stacey who took pole in their MINICooper S Challenge by the smallest of margins. Jeremy Hayman and Mark Penny, in Class B in a Vauxhall VX220, almost snatched top spot but came up just 0.016s shy of the Bird and Stacey benchmark.

Troy Dunlop and William Norman lined up alongside the VX220 in their BMW E36, lapping the Silverstone National circuit just 0.043s slower. The first of the Clios, piloted by Harding and Slater, claimed fourth alongside Geoff Conner in another of the Clios.

The Class D pole went the way of Nick De-Jesus in the BMW 318i Compact, comfortably clear of the line-astern Giles Billingsley and George and Jack Wright. Pole in Class E was secured by Adrian Timpson. 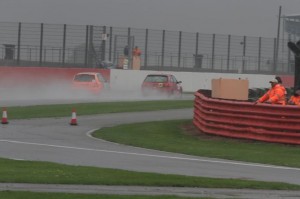 The pouring rain helped the Clios of Ivens/Langeveld and Harding/Slater (both built by Aarons Autos Motorsport) to rocket to the front, utilizing their front-wheel-drive to leap-frog the heavier machinery in front of them on the grid.

Both passed the guest-appearing Nissan 370Z of the 2014 GT Academy racers, and Ivens/Langeveld coped best with the conditions to ease away from the similar Clio behind.

The safety car was scrambled when the Mark Astall and Craig Bunting-shared BMW E36 spun at the exit of Woodcote, finishing midway down the old pit straight resting on the pit wall.

Battles raged throughout the field on the restart, and an intriguing chase was commencing at the 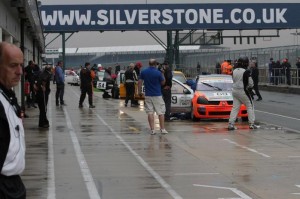 head of the field after the pitstops. The guesting Nissans soon switched places, and a David vs Goliath fight began. The looming Clios forced the once-leading Nissan into a mistake after taking chunks out its lead to move into second and third on the road. Ivens and Langeveld had to be mindful of their mirrors too, managing the gap back to Harding and Slater.

The Mondeo ST220 of Charles Angrave and Mark Witherington almost broke the Clio monopoly, but Gordon Cooper had just enough of a cushion to make it an all-Clio top three. The two cars were also able to catch and pass the former leader, the second of the Nissans.

Gary Johnson impressed in his SEAT Ibiza R to take the Class B win, just ahead of the Ian Brent-Smith and Steve Lyons BMW E30. Johnson made up seven places on the opening lap, and then soon passed the Class B-leading Hayman and Penny VX220. The VX220 lost out to the BMW just after the safety car interruption to be demoted to third. 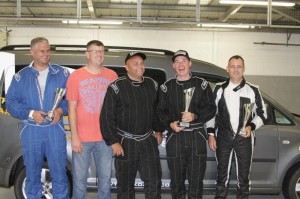